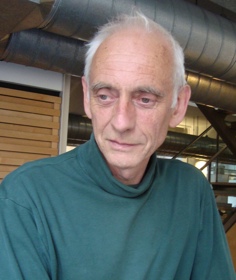 John Hawkins, born in 1949, studied composition with Malcolm Williamson and Elisabeth Lutyens. He has written many chamber, vocal and orchestral pieces, which have been performed worldwide, as well as music for students and children.

See a complete list of John Hawkins’ music
Hear audio on Soundcloud (some live performances, some from software)

On leaving Highgate School, a brief attempt at studying dentistry at Guy’s Hospital was followed by more than 40 years’ work at the book publisher Thames & Hudson in production, design and finally digital book publishing. Musically, a course at London’s City Lit. led to private study with Malcolm Williamson and then with Elisabeth Lutyens.

On the recommendation of conductor Sir Charles Mackerras, John Hawkins was commissioned by the Marine Society to write a Sea Symphony, The commission specified first the experience of a four-week voyage to Australia on a container ship! The BBC broadcast one of three performances of the Symphony by the Bournemouth Symphony Orchestra, followed by a broadcast by the BBC Scottish Symphony Orchestra.

Following the Symphony came other pieces to create a large-scale trilogy. The first of these, Voices from the Sea for voice and string orchestra (‘… a stunning song cycle’ – THE STRAD), sets words by working merchant seamen. Sung by Martyn Hill, it is available on CD from Meridian Records. The final part of the trilogy is The Seafarer for tenor, choir and chamber orchestra in which a translation of the Anglo Saxon poem ‘The Seafarer’ is counterpointed with a dramatic letter from a seaman on a foundering cargo ship, written by Liverpool writer George Garrett.

The one-act opera Echoes was commissioned by and performed as part of Covent Garden’s ‘Garden Venture’ scheme.

Chamber music includes Urizen, a virtuoso piece for viola and piano (first published by Boosey & Hawkes, now available from Comus Edition) which has been performed and broadcast many times worldwide. A recording by its dedicatee Paul Silverthorne was made on the Black Box Music CD ‘Invocations’. Nardo Poy and the New York Orpheus Chamber Orchestra gave the first performances of a version with string orchestra. A further version with chamber orchestra was made in 2007 for a performance in Japan by Yuko Inoue.

The largest of John Hawkins’s choral pieces is ‘This World’ for choir and two trumpets. The libretto was inspired by working with the poet and Blake scholar Kathleen Raine on her book about William Blake ‘The Human Face of God’. It was commissioned by the choir Cryes of London and broadcast by the BBC Singers.

2019 saw performances of my pieces by four students of the Royal College of Music in their final exams – a great sign for the future! The pieces were ‘Urizen’ (viola and piano, two players chose this); ‘Grounds’ (oboe – using a piano reduction of the string orchestra parts); and ‘Variations’ (piano solo).

Other performances in  2019 included ‘Take Two’ (guitar duo); three performances of ‘Cortège?’ (violin and piano); ‘Looking Back’ (violin and piano); ‘Stranger, Lover, Dancer’ (solo ‘cello); ‘Lost in Translation’ (solo piano) and ‘At Two’ for two violas.
‘Sonata Serenata’ for Flute and piano was performed both at the Presteigne Festival by Katherine Bryan and in London, at St Martin in the Fields, by Emma Halnan.

2020
A CD of all my music for clarinet was released in January by Claudio Records. The CD includes the Clarinet Concerto and ‘Simplicius Simplicissimus’ for clarinet and string orchestra and a setting of Edward Lear’s ‘The Dong with a Luminous Nose’ (voice and solo clarinet). Also included are the ‘Clarinet Sonata’ and ‘In Touch’ (three movements for clarinet, cello and piano).
The Clarinet Sonata was performed by Steve Dummer and pianist Yoko Ono in Brighton in February and in Horsham in March.

‘Grounds’ for oboe and strings, first performed in 2019, was to be performed this year by John Anderson (in its oboe and piano version) at the Barbirolli International Oboe Festival. Sadly, the Festival was cancelled because of corona virus, but the piece will be rescheduled for next year!

Performances in 2020 included ‘Party Piece’ for two violas and clarinet performed by members of the wonderful Cuatro Puntos in Hertford CT; ‘Crossings’ for viola and guitar by Patricia McCarty and Bill Zito (streamed online from the InterHarmony International Music Festival); ‘BopBop’ for solo violin (online by Fenella Humphries).
New pieces written in 2020 included four ‘Period Pieces‘ for piano in the form, but not the style, of a baroque suite; ‘Friulian Songs‘ (two songs setting poems in the lovely Friulian language); ‘Canon and Toccata’ for two violins.

2021
New pieces written in 2021:
‘Nocturne’ for violin and piano is a companion piece for my ‘Cortège?’ and is again based on a poem by Garcia Lorca. It was first performed, together with ‘Cortège?’, in Brighton in October 2021.
‘Contretemps’ is a dramatic new piece for solo bassoon (c. 2’30”)
‘Period Pieces’ A string trio version of my keyboard suite (Allemande, Courante, Sarabande and Gigue)
‘Three Cafés’ (‘New York’, ‘Rio’ and ‘Paris’) for clarinet and piano are enjoyable character pieces for (fairly) advanced students!

2022
Performances
On 15th January, ‘Another Orpheus’ for string orchestra was performed by Musicians of All Saints at St Mary’s church Brighton.
On 25th January, Yoko Ono gave the world premiere of ‘Period Pieces’ for piano at the Chapel Royal, Brighton.
On 5th March, a concert in memory of the poet Edward Thomas was held at Steep where Thomas lived before his death in WW1. The concert included my song cycle ‘The Unknown Bird’ (baritone with flute, viola and harp) and the world premiere of the cycle ‘Strange Bridge’ for baritone and piano. The soloist was John Lofthouse.
New Pieces this year
‘Strange Bridge’ for voice and piano is a cycle of three poems by Edward Thomas
‘Adding up’ – four pieces for flute and clarinet
‘Mimes’ – a virtuoso solo clarinet single movement written for Yulia Drukh
‘Gospel and Collect’ a re-written version of a church anthem (unison high voices and organ) . The words are taken from the prayerbook and are sadly appropriate in these times of war: ‘Lord save us, We perish.’

John Hawkins is married with three children and lives in Lewes, East Sussex. He is a member of the composers’ group New Music Brighton.

See a complete list of John Hawkins’ music
In addition to the commercial recordings, several pieces can be heard in SoundCloud

This website uses cookies to improve your experience while you navigate through the website. Out of these, the cookies that are categorized as necessary are stored on your browser as they are essential for the working of basic functionalities of the website. We also use third-party cookies that help us analyze and understand how you use this website. These cookies will be stored in your browser only with your consent. You also have the option to opt-out of these cookies. But opting out of some of these cookies may affect your browsing experience.
Necessary Always Enabled
Necessary cookies are absolutely essential for the website to function properly. This category only includes cookies that ensures basic functionalities and security features of the website. These cookies do not store any personal information.
Non-necessary
Any cookies that may not be particularly necessary for the website to function and is used specifically to collect user personal data via analytics, ads, other embedded contents are termed as non-necessary cookies. It is mandatory to procure user consent prior to running these cookies on your website.
SAVE & ACCEPT